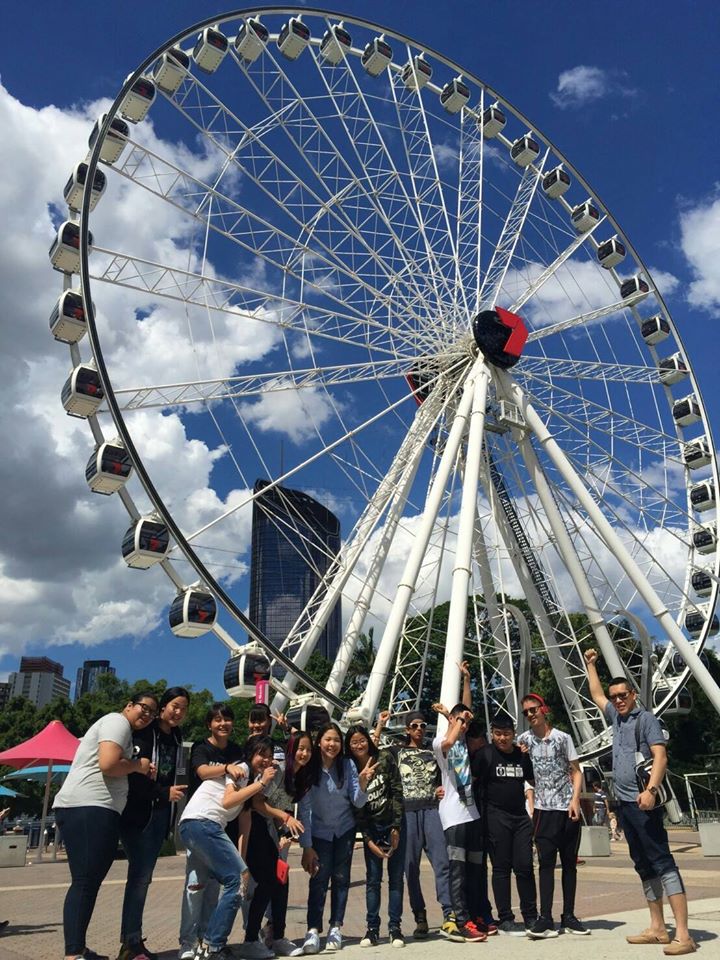 Australia, land of the kangaroos, spiders, hot weather and so much more.

From the 7th – 16th March 2017 11 students went down under. Our trip begins on the Brisbane Gold Coast. We were chilling at a park when we saw a Ferris wheel. And like any kid on a school trip we decided to go on the Ferris wheel. It was perfect because the weather was perfect that day and we got to see much more than at ground level: Sheep, sheep and more sheep… nah just kidding, we got to see the landscape from a bird’s eye view.

After that we went to the hotel which was nice except for that one room. Mine. Just imagine 5 guys in a small room with 2 beds. It didn’t go as well as we had planned. But we made it work. We attempted not to sleep but because we were tired from all the sight-seeing, we fell asleep very quickly.

We woke up the next morning excited because we were going to go to Movie world. My favorite place out of the whole trip. We went on all of the rollercoasters and rides. My favorite was the superman ride. The ride is as fast as a Lamborghini Gallardo. It was exciting and the food amazing. We also got to see a stunt show. It was about drifting cars and racing them.

After Movie World we went to “Sea World”. We started our visit by taking some photos of the deep sea museum. And then we went to a temporary tattoo shop. Every single boy got their own tattoo.

Later we watched an amazing dolphin show.  It was an eye-opener that dolphins could work in concert with humans!

We had lunch after that and enjoyed talking together.

After lunch we headed back to our room to chill before going to the airport for our flight to Melbourne.

The flight was 2 and a half hours, most of which we spent napping.

While in Melbourne we went to visit many places before we got to check in at our hotel; efficient use of our time!

When I walked into my room I noticed that it was a very well appointed room It had almost everything you needed for “survival” such as a kitchen, bedroom, and one of the best bathrooms I have ever seen.

After we unpacked, we went out to get some food for dinner. Since we had a kitchen, we planned to cook.

Phum, was our chef. His cooking is amazing.  He did not disappoint us.

After we finished eating dinner, all of us fell asleep except for me.

I was watching SpongeBob and feeling a little lonely. Sadly we stayed at this hotel for just 1 night. Phum, Jerry and myself were so sad that we had to leave that place.

But we were soon feeling great again because of the next city we were visiting.

We checked into a hotel that was pretty cool as there was an Xbox 360 and the room was very comfortable.

But imagine 5 guys in the room with two queen sized beds – I will leave it to your imagination!

After unpacking and some quiet time, we went to the Sydney Opera House where we had to interview people. We had a lot of fun.

In the evening we ate Chinese food at a pretty good restaurant. I love Chinese food not having eaten any for 10 days means I was starving for Chinese!  I was satisfied with the restaurant’s food..

On day 2 we went to the Koala Park. It was the first time that I had ever touched a koala bear.  The koala bear’s fur was not as soft as I thought it would be.

There that afternoon, we watched how a sheep’s wool is cut. The sheep that had already got their cut looked funny.  We had lunch at the Koala Park It was an awesome lunch even though it was not Chinese food.

2 hours later we were in the Blue Mountains aka the Three Sisters. It was an amazing sight, as wonderful, I believe, as the Grand Canyon which I am planning to visit sometime in the not too far future.

Then we went back to the hotel and we turned on our metal music (it’s really loud) until a hotel employee came and told us to turn down the music. We were very embarrassed.

Later that night Yuan, Jerry and I were walking beside a street filled with a lot of the food! As no one wanted to share any, I could not buy any of the food.  We ended up at a seven-eleven which was not just a normal mini mart because there was a Krispy Kreme in it. How cool is that?!

On our last day in Sydney we went to a local market which was very different from the markets in Thailand.

We bought a lot of souvenirs for our friends back in Thailand.

That concludes our Australian trip.